Lekki Port LFTZ Enterprise Limited (LPLEL), a special purpose vehicle for the construction of Lekki Deep Sea Port at the Lagos Free Trade Zone, has announced the signing of a US$629 million facility agreements with the China Development Bank (CDB) for the construction of the port which is to be Sub-Saharan Africa’s deepest port and Nigeria’s first deep seaport. 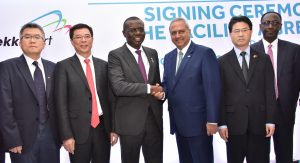 Speaking at the historic ceremony on Wednesday, October 23, 2019, the Governor of Lagos State, Babajide Sanwo-Olu stated that the project is another milestone that would contribute greatly to fast-tracking the delivery of the port’s infrastructural development and construction as well as fostering the economic prosperity of the state and the nation as a whole.

“This is a new beginning for us in Lagos. We have achieved another milestone in our efforts to transform the state and accomplish the 21st-century economy. As a government, we will do all that is possible to ensure the terms of the agreement signed today are delivered”, Sanwo-Olu said. 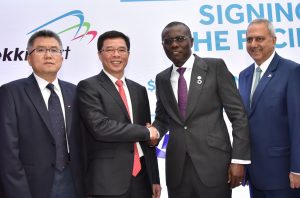 Delivering his remarks at the signing ceremony, the Managing Director (Africa), Tolaram Group – promoters of the port, Mr Haresh Aswani described the facility agreements as a major step towards the realization of the Lekki Port project by ensuring the availability of the necessary funding required to complete the project.

Aswani noted that the agreement signing is a symbolic milestone in the company’s decade long journey to deliver the world-class deep sea port which would change the narrative of Nigeria’s maritime sector and serve as a very important catalyst for economic development and the general well-being of Nigerians.

Aswani solicited the continued support of the Federal Government and Lagos State Government especially in the area of road infrastructure enhancement to enable a seamless construction and operation of the port after completion.

“Lagos State has started on these works but we have now reached a stage where the remaining critical roads need to be built and enhanced. We look forward to your continuing support in delivering this for the success of the Port Project and benefit of Lagos State, Nigeria and all Nigerians”, he added.

In his own welcoming remarks, the Chairman, LPLEL, Mr Biodun Dabiri stated that the facility agreements are fundamental to the successful delivery of the Lekki Deep Sea Port as the transhipment hub of Africa that will inadvertently boost Nigeria’s economy, provide massive direct and indirect employments, generate revenue for the nation and boost the Gross Domestic Product of the country.

Dabiri noted that the facility agreements’ funds when combined with foreign direct investment of over $230 million through equity injection by China Harbour Engineering Company (CHEC), the company has reached financial closure and can squarely focus on the successful delivery of the seaport project.

Dabiri stated “The impact of the port on the Nigerian economy would be immense, creating over 200,000 direct and indirect jobs and generating about $360billion over the period of the concession. It will also generate the much needed foreign exchange thus boosting the Nation’s GDP”. Furthermore, he stressed that the project is very strategic to the economic development of the Lekki Free Zone and would definitely attract huge investments to the zone and Nigeria generally.

Dabiri also commended the CDB and the Government of the People’s Republic of China for their sustained commitment to economic growth in Nigeria through investment in port infrastructure such as the Lekki Deep Sea Port.

On his part, the Deputy General Manager, China Development Bank, Mr Zhang Aijun explained that the facility agreements demonstrates the willingness of China to continue in its contribution to the development of Nigeria’s economy through the facilitation of the execution of the project adding that the bank considers the project as an opportunity to further expand its business footprints in Nigeria.

“China Development Bank, as the financing party, will provide a long term loan of $629 million to support the construction and operation of the project”, he said.

Also speaking at the occasion, the Chairman of China Harbour Engineering Company (CHEC), a major equity investor and the EPC contractor for the project, Mr Lin Yichong thanked all the stakeholders for the support which has culminated in a successful negotiation of the financial agreements.

While assuring Nigerians on the delivery of the project based on the agreed schedule, Yichong noted that the company remains absolutely committed to deepening its relationship with the Federal Government of Nigeria and Lagos State Government by helping to develop link roads to the port.

“We want to assure you all that we would do all it takes to deliver this deep seaport within 30 months. We are highly optimistic that the success of this project would open up many sectors of the Nigerian economy making Lagos and indeed Nigeria the transhipment hub destination of many West African markets,” Yichong said.

Goodwill messages were delivered by the Managing Director of the Nigerian Ports Authority, Ms Hadiza Bala Usman, represented by Dr Sekonte Davies as well as representatives from the Infrastructure Concession Regulatory Commission and the Nigerian Export Processing Zone Agency.

Concluding the event, the Chief Executive Officer, LPLEL, Mr Navin Nahata expressed appreciation to all institutions and individuals who have contributed towards reaching financial close on the Lekki Port project.

Nahata particularly applauded CDB for providing the funding support needed to speed up the execution of the Lekki Deep Sea Port Project. According to him, the signing ceremony is a clear testimony to the strong bilateral relationship that exists between Nigeria and China. Nahata commended CHEC for being a reliable partner since 2012 and contributing immensely to bringing the project to fruition.